Our Lady's is a faith community built on the Brigidine traditions to provide quality education and respect for all. 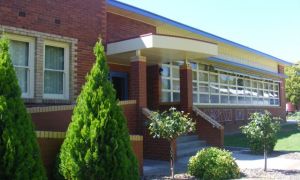 The rapid growth of Wangaratta after World War Two prompted the late Monsignor Mahoney to select some acres off White Street for the purpose of expanding facilities for Wangaratta’s Catholic Community. Fr James Byrne was appointed to the new parish of Our Lady’s in March 1958. One of his first priorities was to establish a school for the rapidly increasing population of the South Wangaratta area. He had approached the Brigidine Community who signified their willingness to provide teaching staff, so plans were drawn and building commenced.

The new school was solemnly blessed and opened by the Most Rev Dr Stewart on the 7th December 1958. The school at that stage comprised 4 classrooms and the administrative centre of Office, Staffroom and Storeroom. Brigidine Sisters Magdolena, McNarmara and Regina Pelly were the first Staff Members and were warmly welcomed by the Parish. The first enrolment of ninety children in Grades Prep, One and Two used two of the new classrooms leaving two vacant for future needs. (They must be the same ones we’ve still got today!)

The school, however, needed to expand to cope with increasing enrolments in the 1960’s and 1970’s as the surrounding area was built up and many new families settled in the Yarrunga area. The Church was used as a classroom until two new classrooms were added along White Street, then in the 1970’s the new Infant and Junior school area was opened to the delight of children and staff.

In 2003 a major change to the school entrance provided an impressive facelift to a number of areas. Renovations and refurbishment of the front entrance to the school, administration office and staffroom areas gave a more modern and open appearance. The availability of the grant from the State government to fund this project was a crucial factor. $201,900 was provided by the Victorian State Government under the Needs Based Capital Funding Program for Non-Government Schools with the school contributing a further $5000.

In 2010 the original school hall, which served as the Church in the early days of the Parish, was replaced with a new facility built as part of Building the Education Revolution. It, along with work completed across the playground, has created a very comfortable and functioning place of learning.

We will continue to move forward in the years ahead, remaining positive about the future of Our Lady’s and we will spend a significant amount of time passing on the story of our fine school to the children in our care.